Foreign Language and Literature Degrees Pay the Most

Parents, don’t despair. Even if your child spends four years of college reading Hungarian poetry or delving deep into the Faulkner oeuvre, he or she can still earn a decent salary shortly after packing up the senior-year dorm room.

So says the National Association of Colleges and Employers, which reports that the top-paying liberal arts majors for 2014 graduates are foreign languages and literature (average starting salary $46,900) and English ($42,200). The results are based on job offers that students accepted earlier this year and were reported by employers in February 2014 primarily through a variety of government surveys. 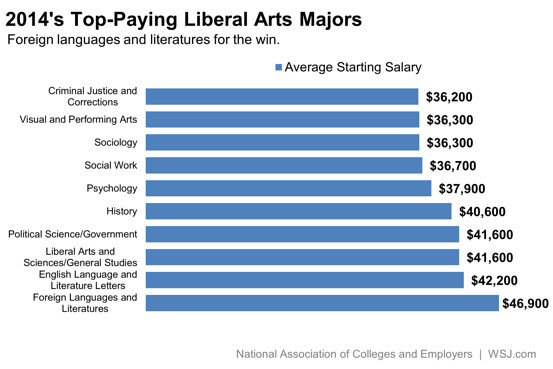 The lowest-paid? Criminal justice and corrections ($36,200). Even visual-arts majors did marginally better.

“Employers hiring foreign languages and literatures majors did so primarily to fill elementary and middle school teaching positions,” according to the organization, which primarily represents companies that recruit on college campuses.

Indeed, the educational services industry regularly scoops up the most new college grads, said NACE, which found that schools and other employers in the field hired 463,500 individuals awarded bachelor’s degrees in 2014, with an average starting salary of $40,894. The next biggest employer for this cohort was health-care and social assistance organizations, which hired 296,000 graduates (average salary $42,623).

For all U.S. nongovernment workers, average weekly earnings rose by 1.5% from February 2013 to February 2014, according to the Department of Labor.