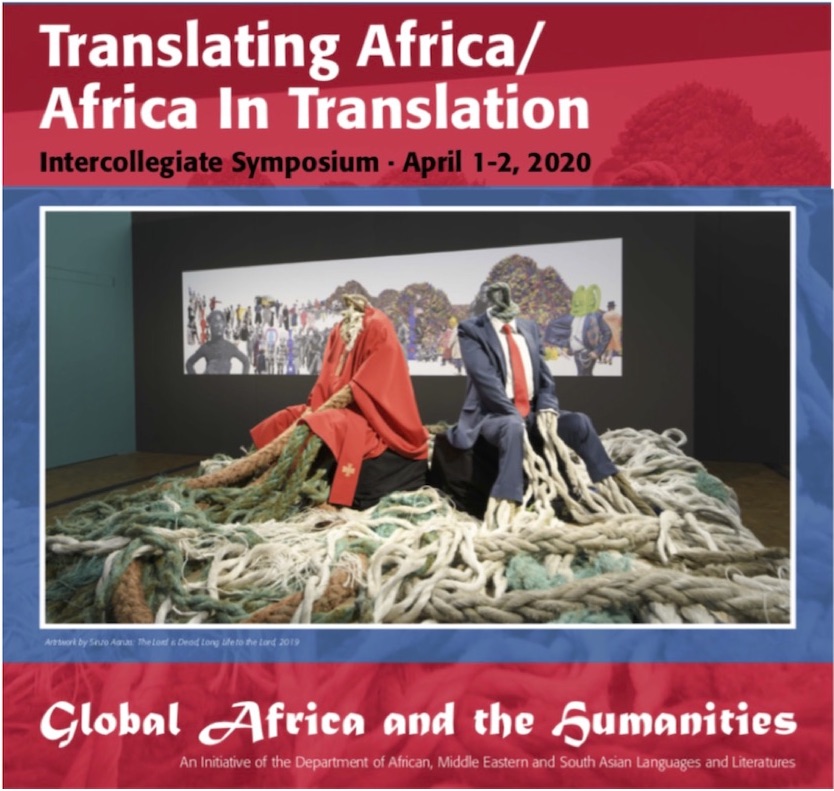 Global Africa and the Humanities Series presents the second of a three-part symposium, focusing on the theme, "Translating Africa/Africa in Translation," which takes place on April 1-2, 2020. The term translation is employed here in both its literal and metaphorical senses, and as a micro as well as a macro phenomenon. It encompasses a wide range of experiences, from the migration of texts across languages/cultures/societies/regions and their influences on the construction of (new) imaginings of/about Africa, to the formation of and/or actions on ideas/theories/policies/initiatives across disciplines that open up new possibilities for understanding what Africa was, is, and can be. What has been the impact of the machinery of translation globally on our changing readings of Africa in the longue durée? What has been the role of translation in (re)shaping the African literary canon? How have translations and translation practices been galvanized as instruments of political resistance to a range of hegemonic forces that have been at play over the decades? Into what kinds of representations do the contesting metaphors of/about Africa translate in the global marketplace of platitudes and banalities, and what are their implications on the "Africas" and "Africanities" we imagine? How are the interventions of activists and scholars in areas ranging from the economy to theology, from education to ecology, translating into new framings, figurations, and fissures of hope, transforming Africa into a knowledge economy? What are some of the ways in which translation becomes an embodied performance through dance, music, theatre, and visual culture? These are some of the broad questions that “Translating Africa/Africa in Translation” examines, exploring theories and practices of translation in their full multidisciplinary and interdisciplinary character while challenging Eurocentric parameters and terms of reference.

Acknowledgment of co-sponsors for 2020 Symposium “Translating Africa/Africa in Translation: