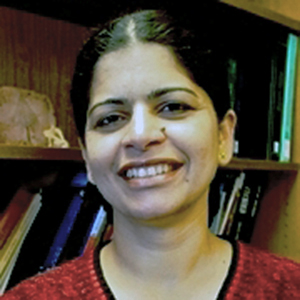 Her book, Bombay Modern: Arun Kolatkar and Bilingual Literary Culture (Northwestern University Press, 2016) is also being published in India by Speaking Tiger Publications in 2017. Through a bilingual and materialist reading of the poetry by Marathi/English poet Arun Kolatkar, the book shows how the genre of poetry emerged in Bombay in the post-60s (the sathottari period) as the instrument of radical protest and experimentation at the multiple junctures of regionalisms, new publishing spaces, national politics and transnationalisms.

Her other publications and research include work on multilingual Indian poetry, Indo-Caribbean and Postcolonial literature, and larger comparative Indian and postcolonial modernisms.

Her ongoing project (in collaboration with Dr. Bronwen Bledsoe at Cornell University South Asia collections) is the building of an archive of multilingual post-1960 Bombay poetry at Cornell University. She is currently co-editing a special double issue of Journal of Postcolonial Writing (“The Worlds of Bombay Poetry,” Spring 2017) and she is also working on a cartographic and archipelagic study of Indo-Caribbean writing.